Last weekend the german Ubucon took place in the town of Katlenburg-Lindau. It was the 8th Ubucon in Germany and it was the third time that I attented an Ubucon as a visitor and as a speaker.

It was the second time that I participated in the organisation of the Ubucon. Last year I was part of the organisation team for the event in Heidelberg. This time the organisation was rather „silent“. In my opinion it was sometimes too silent on the mailing list. The town where the event took place was rather small, therefore there were fewer speakers and also fewer visitors compared to the last two years. First I didn't expect that the event would be great, but luckily I was wrong!

The first day of the event was friday. All visitors and speakers got a name plate with their full name and their nickname at the front desk. Last year, my name was actually too long. This time only one character was missing. Atleast I got used to mistakes in my name. :-) 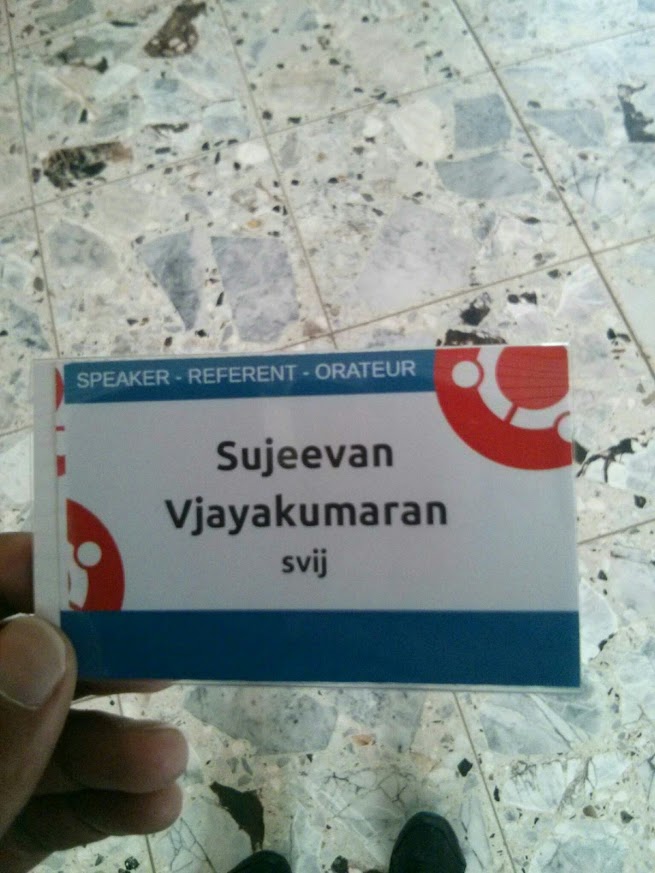 The opening keynote was hold by Torsten Franz who was also the head of the organisation team. After this, he was talking about „10 years Ubuntu, 10 years Community“. Later a part of the visitors went to the first Social-Event which took place at a castle next to the school. Personally I didn't go to this event.

The second day started at 10 o'clock in the morning. It was the first time that I did a workshop, which also started on that time. I talked about „Git for Beginners“. At the beginning we had a few issues with the Wifi. This also affected my workshop, because it took a rather long time for the participants to download and install git. Therefore, I changed a few things of my workshop, so afterwards the participants didn't need a working internet connection. I planned about 3 hours, but we finished after about 2,5h.

On the rest of the day, I didn't attend any talks. I rather talked to all the other nice people :-). At the evening we had two Social-Events. A big part went to „Theater der Nacht“ („Theatre of the night“). The other smaller part stayed at the school, where two persons played Live-Music. The Live-Music was quiet good, but all the other people who went to the Theatre said, that it was really great. It seems that I missed something. Bernhard took a few really nice photos in there.

On Sunday I only attended to talks. The first one was about LVM, the other one about systemd. Both talks were hold by Stefan J. Betz. and they were really informative and also a bit funny.

At the afternoon the Ubucon ended. We had really many people who helped to clean up and pack everything. Therefore, many people could leave earlier than expected.

The location was great! I didn't expect that a primary school was a good place for a Ubucon, but it is! The technical infrastructure was really good. The school had several „Smartboards“ with projectors. At the entrance area there was a big hall, where you can sit and talk if you're not in hearing a talk. In this hall there were several computers with different Linux-Distributions and Desktop-Environments.

It was the first time that we had a Gaming-Lounge. There were two rooms which contained four Ubuntu-PCs with large TVs and also two Table football. The idea was great and also the rooms were nice. There were many people who played games there. I hope that we will have a similar Gaming-Lounge on future Ubucons.

All speakers got a nice gift-bag from the local organisation team. This bag mainly contained several items of the region. In my bag there were a few sausages, wine, beer and a sauce. Personally I don't eat and drink that stuff, but it was a really good idea and gesture!

On all our Ubucons, the entrance fee of 10€ includes the money for food and drinks. On the last few years we had only two or three different types of bread roll. This time we also had bread rolls, but we also had Bockwurst and different types of soups. All of them were really tasty and everybody had a bigger choice to eat something which they like.

This years Ubucon was great! Compared to last years Ubucon we had a smaller amount of attendees but this time the organisation team in Katlenburg was really good. They had different really good ideas, like the Gaming-Lounge and the gift-bag for all speakers.

I simply hope that next years Ubucon will as good as this years Ubucon. The place is not fixed yet, we are going to search for another place for next years Ubucon. By shifting the place of the Ubucon every year, all attendees will see different cities and you can also meet different new nice people. The latter reason is my main reason why I attend and help to organize the Ubucon.

If you're looking for a few nice photos of this years Ubucon, have a look here. Bernhard Hanakam took some really good photos.