Hi Jane and thanks for joining the interview. Could you please tell me a few words about yourself?

I’m Jane Silber and I’m the CEO of Canonical.

Canonical just launched the first Ubuntu Phone today, what is your favourite feature of the phone?

There are certain apps which I really like. I really like the gallery app, I find it a pleasing experience to use. And in terms of the user experience I love the right edge swipe, I love the way you can swipe from the right edge and see all the open apps and flick up to close them. It pleases me! Sometimes I open a bunch of apps and play with that thread just because I think it’s just beautiful.

Are you already using Ubuntu Phone as your daily phone?

I use it as a daily phone I really admit that I also carry an Android Phone. I have a Nexus Phone which I use as my Ubuntu Phone, I don’t have one of the new bq. I’m looking forward to getting one of those. And I also have some friends who are addicted to WhatsApp so I use my Android phone for the one purpose to talking to friends on WhatsApp. But I’m slowly, slowly, slowly are converting them to Telegram. So I message them on Telegram and they’re starting to get it. And Telegram is a great app so it works fine.

Do you have any feature on your Android Phone which is not present on Ubuntu Phone yet?

No, there’s nothing which I miss other than WhatsApp. There is no specific feature on Android which I don’t have on Ubuntu. 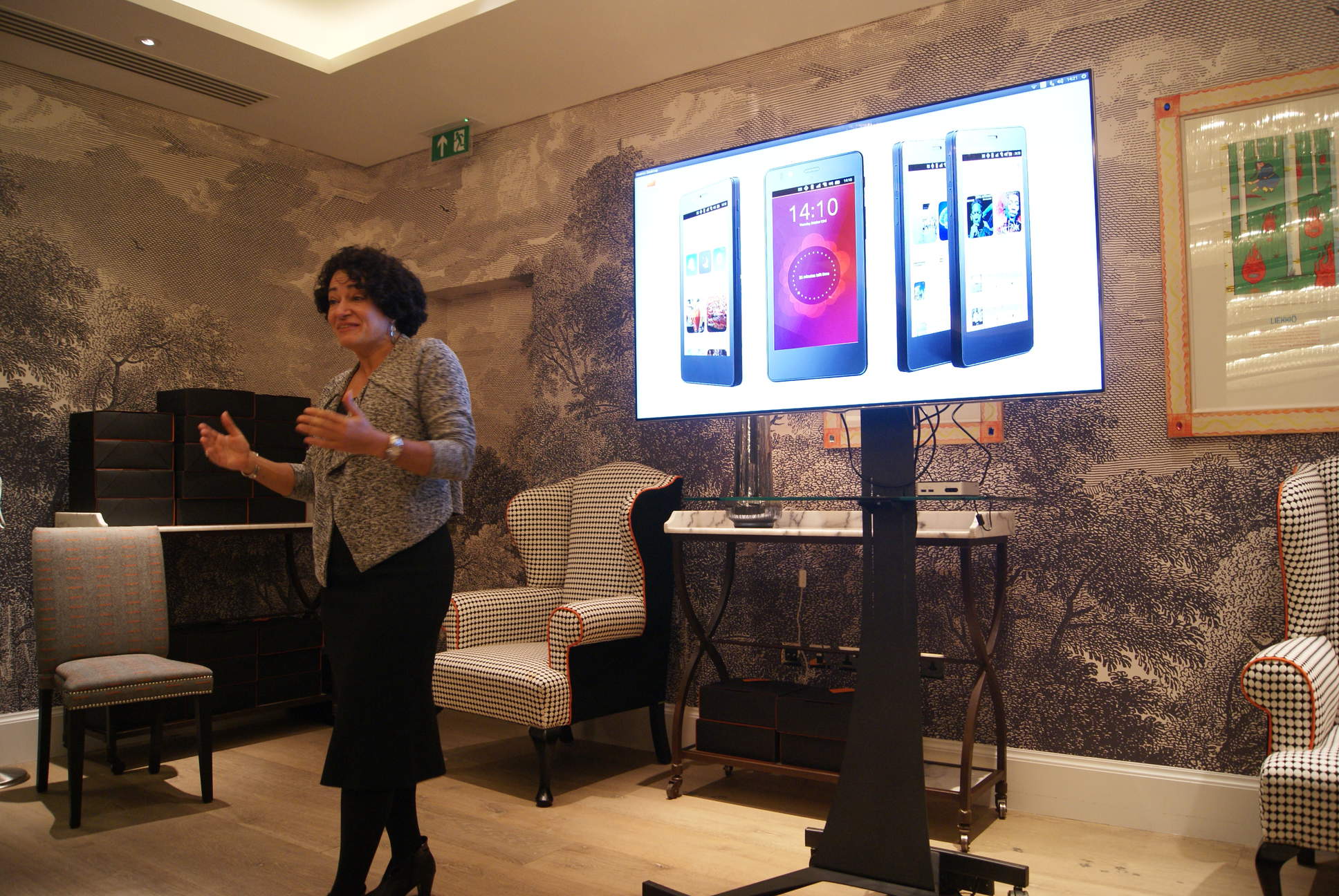 Let’s talk about the business. What is the business model of Ubuntu Phone, how is Canonical making money?

There is a unit charge that OEMs shipping Ubuntu Phone are paying us. And depending on the region and the services included there is revenue share on some of their services, if a user buys different things. The exact details of that we keep confidential as a piece of commercial information. But it is a system where both parties are collaborating and work together. And both parties benefit.

How about developers? Let’s say I want to create an app for Ubuntu Phone to make money?

It’s the same sort of revenue share program for developers for publishing apps and scopes. It is small now because there is a limited user group right now.

What is the main difference between Ubuntu Phone, Android and iOS?

I think for the Ubuntu Phone what users will notice most is the experience. You have a difference experience of bringing content to the user in the form of scopes as supposed to a grid of app icons. And on that people can react positively and negatively because of the change. But if they give it a try and use it, it is a very pleasing experience. Additionally you get very used to aggregated content from different sources. There are many differences under the cover but I think from the user perspective it is the new experience that scopes can bring with bringing content.

But now, I have a question for you! From what you have seen so far what do you think the people appreciate the most?

I also think that scopes are a pretty nice feature. It’s not comparable to systems like Firefox OS which has just apps. In my opinion Ubuntu Phone has a better idea, so let’s see what happens.

What also scopes are allowed to do, or what hardware partners can do is to differentiate between the phone to highlight different services. They have customisation opportunities so people are able to choose and have a meaningful difference between different phones from different operators. So you will potentially get a different experience with Meizu and bq.

So what are the differences between …

Right now if you buy an Android Phone the operators try to do something different then other operators. So they mess around with Android. They customize it in different ways and you get a lot of fragmentation. And that is also very difficult for developers.

What we can do with scopes and frameworks is to allow a same baseline for developers. In different regions we can also offer an experience for that region or country. If an operator for instance has a set of services which they want to highlight.

Services like Cloud Storage, Music, Video, so there can be customisation on that level. And the user can also say “I don’t want to get my music from grooveshark”. It allows a very high level of customisation without fragmentation that has haunted some other ecosystems.

So different OEMs will probably have different pre installed apps and scopes?

This new bq Phone with Ubuntu is launching in Europe next week, what about the US market or asia?

In asia we will launch with Meizu. We will launch Meizu phones both in Europe and in China. The US will follow after that but we are not ready to announce anything. We have plans.

No dates. ;-) Meizu will absolutely start first and the US we are not announcing yet.

Alright thanks for the interview!