Last weekend the 9th Ubucon in Germany took place in Berlin. It was the first time that I was the head of the organisation team for the vent. After 2012, it was the second time that we were guests at HWTK in the Center of Berlin. It was as always hosted by the ubuntu Deutschland e.V..

Traditionally, the Ubucon begins on a Friday. Personally, I was in Berlin in the early morning, so I had time to see a bit of Berlin. In this case I’ve met SturmFlut for the first time and Riccardo Padovani for the second time. After we visited a couple of things in Berlin, I went to the venue to set up the rooms for the Ubucon. Thankfully we had many people who helped! After (nearly) everything was setup, we went over to the museum “Story of Berlin”. There, we had a really interesting tour through a fallout shelter and the museum. We did learn how they would organise the bunker, if there would be a worst case scenario. In the museum itself, we learned many things about the history of Berlin. We were roughly 20 people in the museum, later on, we moved to the Restaurant called “Route 66” where 40 people came together for the social event. 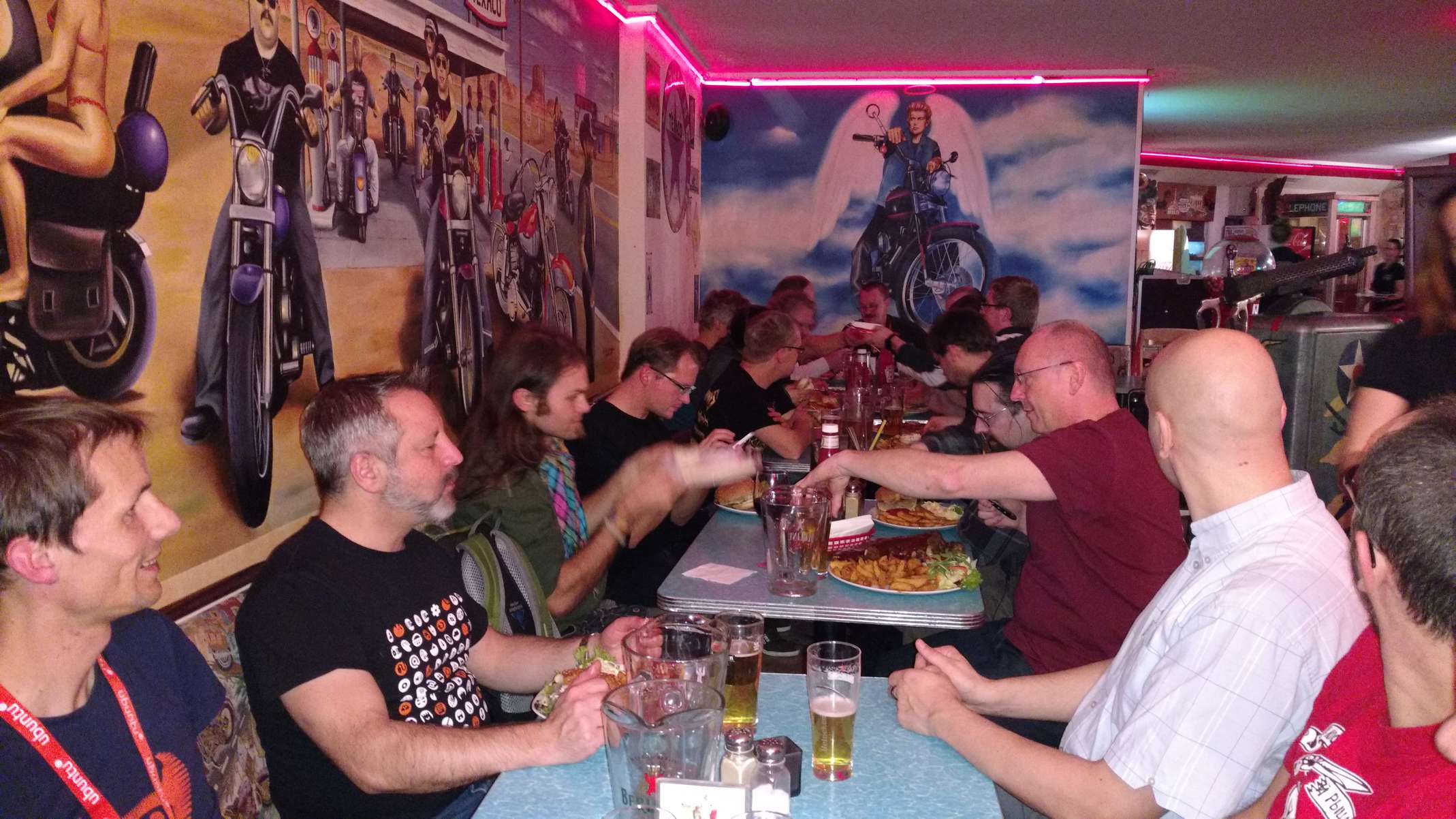 We opened the registration booth of the Ubucon at 9 o’clock in the morning. At the same time the catering-service delivered the canapé, sandwiches, bread rolls and salads. Funnily, these guys were also happy Ubuntu users. :-)

As the main organiser, I opened the Ubucon at 10 o’clock. The schedule of the event did contain many Ubuntu topics - that was different in the last years. We had 28 talks and workshops in 4 to 5 tracks. Personally I didn’t attend any talks before lunch. Later Simon (aka SturmFlut, the panda guy) and me did the talk about the UbuContest, where we handed the prizes of the contest to the winners. Luckily Riccardo Padovani, Michał Prędotka from the FallDown Team and Jorik van Nielen from “Click the Cookie” made their way to Berlin. Simon made some really cool videos for the UbuContest, which you should watch: Intro Video, the unofficial Ubucon-Video, Falldown, and Monster Wars. 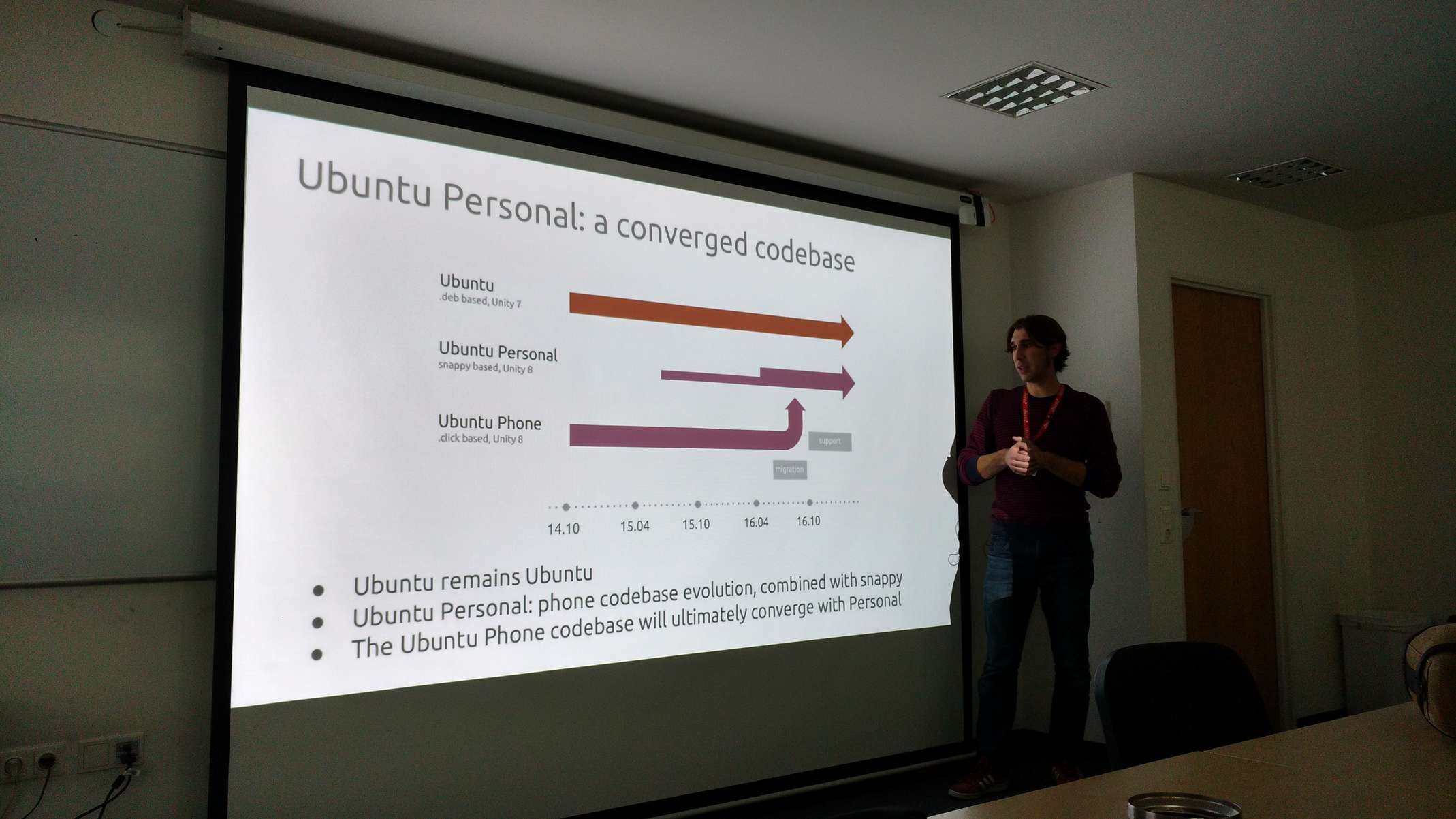 After our talk, David Planella gave a speech about “The Ubuntu Phone and the road to convergence”, which was interesting and also contained some new information which I didn’t know yet. We had a camera guy, who sadly only got managed to record the second half of the talk. The video might be online in the next weeks. My second talk was my actual first English talk about Snappy Ubuntu Core with Daniel Holbach and Oliver Grawert. The day ended with the “Linux-Quiz” where the most funny part was how often the quiz application has crashed. ;-)

Due to the clock change the night to Sunday was an hour longer. Sunday is mostly the day where fewer people are coming over. Also, the day is a bit shorter, because the last talks ends at 3 PM. At 9 o’clock in the morning, the most motivated people where the two guys from the catering service during the delivery of the food. Personally, I visited some talks again. This time the systemd-Daemons talk from Stefan Betz and the “What is Cloud?” talk from Kristian Köhntopp. After the lunch, Simon talked about “Linux and Supercomputing” and in the last slot I organised a quick discussion round to gather ideas of the next Ubucon, which will be the UbuCon Europe! 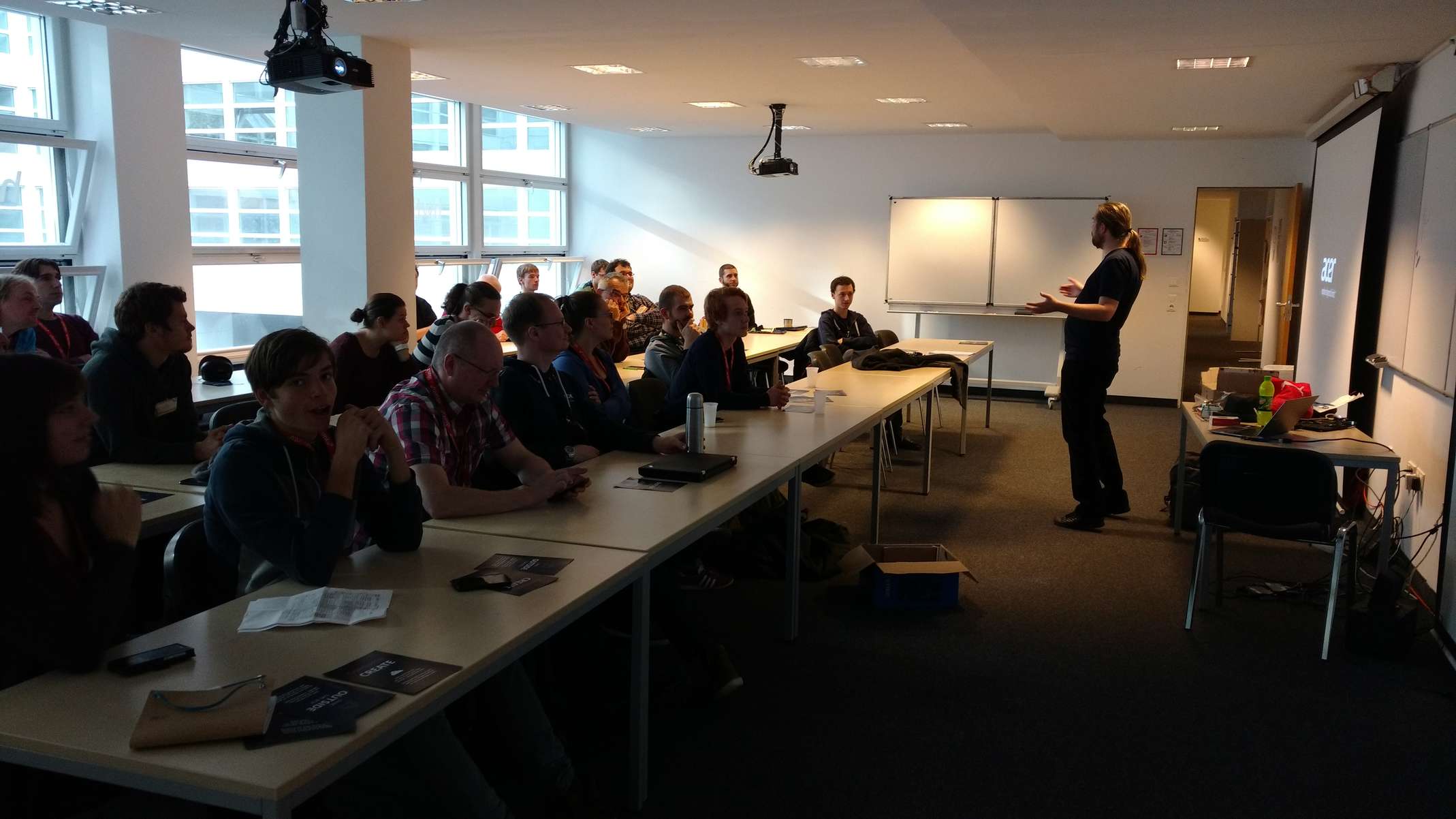 It was the fourth Ubucon I’ve attended, the third where I was part of the organisation and the first as the head of the organisation team. It was definitely more stress-free than I would have expected. This was possible because we had a great team who help whereever they could. Thanks to Torsten Franz and Dominik Wagenführ for the work before the event. Thanks to Peter and Adrian who helped a lot in Berlin. A big thanks goes also to Lynxis, who brought his hardware and setup the whole network, which was working flawless.

We had nearly 120 attendees this year. The number is nearly the same as in the last years. If you want to see some photos, David Planella has uploaded a few on flickr.

For the next year we’re hoping to get a bit bigger. The 10th Ubucon in Germany will be the UbuCon Europe, taking place in Essen, Germany! There is already a website on ubucon.eu and a Launchpad-Group where all the organisation stuff will be discussed. During the Ubuntu Online Summit, we will also have a session to gather more and new ideas. If you want to help or bring up some ideas, feel free to join us!